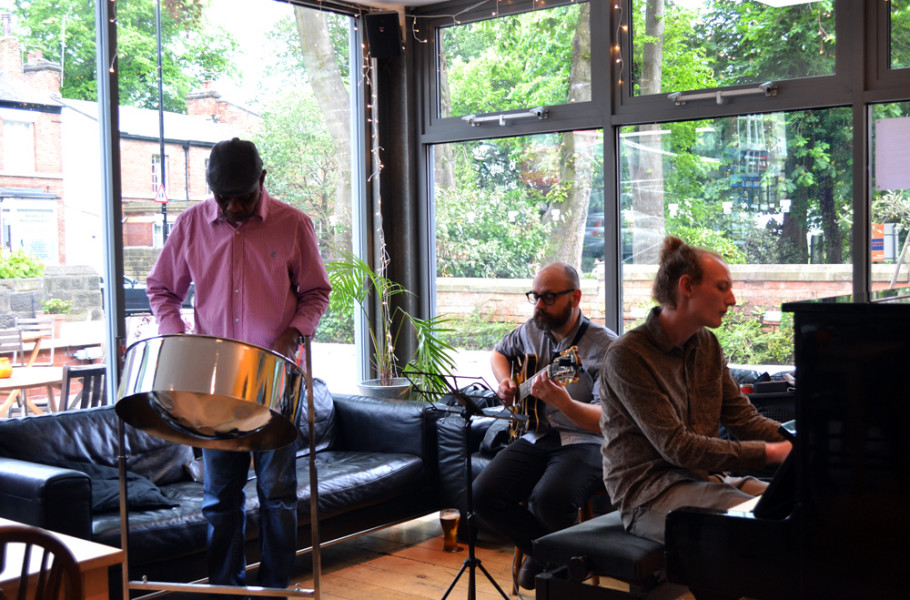 Supporting cafés that give back :)

Leeds is a wonderful place for independent cafes and bars. There’s always something exciting happening somewhere, or cafés that will be doing amazing things for charity and giving back to their community. I’ve recently been to two venues that are both brilliantly amazing and beautiful, with the bonus that their food is delicious.

I’ve eaten at Seven plenty of times, especially back in the day as our office sat on the same street. One thing I never paid enough attention to was just all the other cool things Seven even did. Even though I’ve been inside a few times, I’ve never spotted the extra room tucked away to the back of the room, which is a huge hall where different artists come along to perform a range of music genres, where comedy shows are hosted and films are screened. 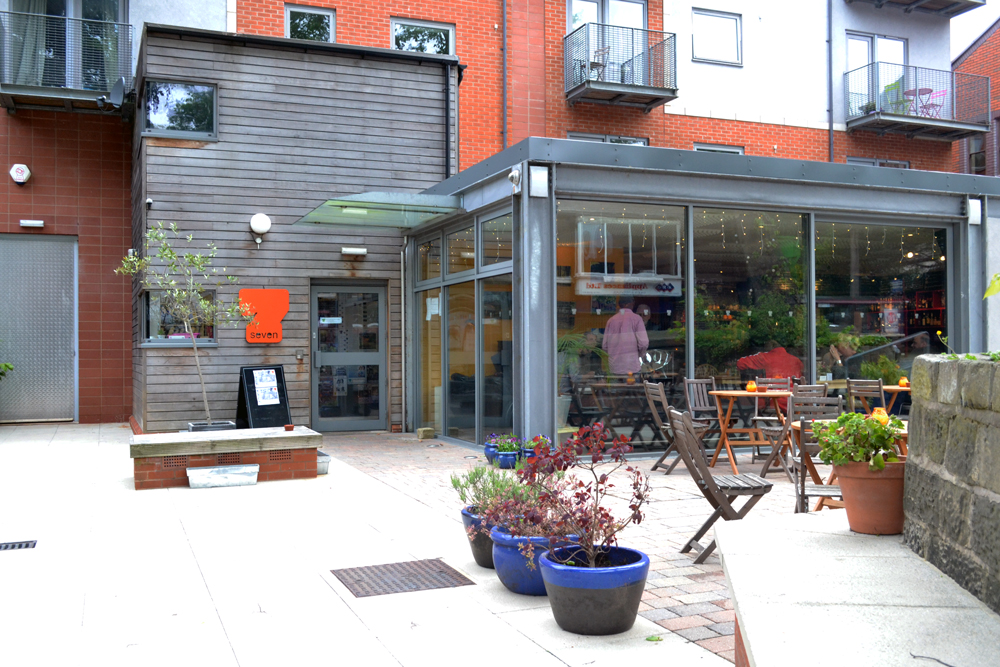 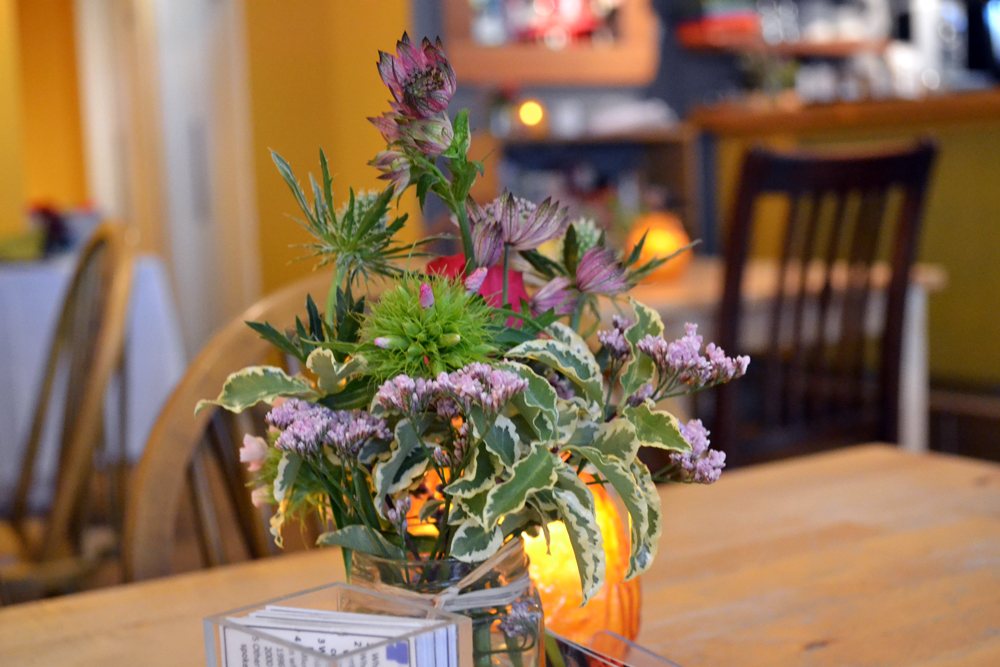 If you haven’t been to Seven, their building is decorated ever so cutely, with a really warm feel to it. It’s the small things that count like fresh flowers and candles on tables, the handwritten chalkboard menu and fairy lights hung up around the windows. I’ve always enjoyed dining at Seven so when I was invited to taste their summer menu (it launches in July by the way) I’d have been mad not to go. 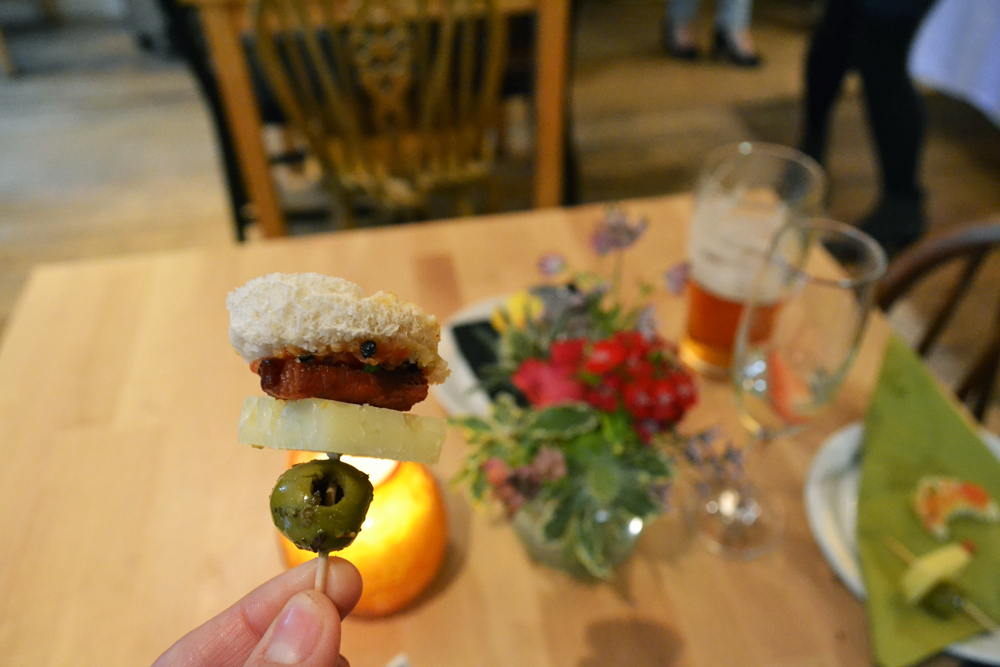 The menu had a strong Mediterranean theme to it, with a lot of fresh herbs and flavours- perfect in my eyes for a summer menu. Whilst the menu has strong Italian and Spanish twang to it, all the produce is sourced locally.

One of my favourites was this four piece combo of bread, chorizo, manchego (Spanish cheese) and olive. It was extremely tasty and moreish and in all seriousness, who doesn’t love cheese, bread and meat? The summer soup was very tasty- the sweet potato and coconut blend had a hint of spice, that went down very well. 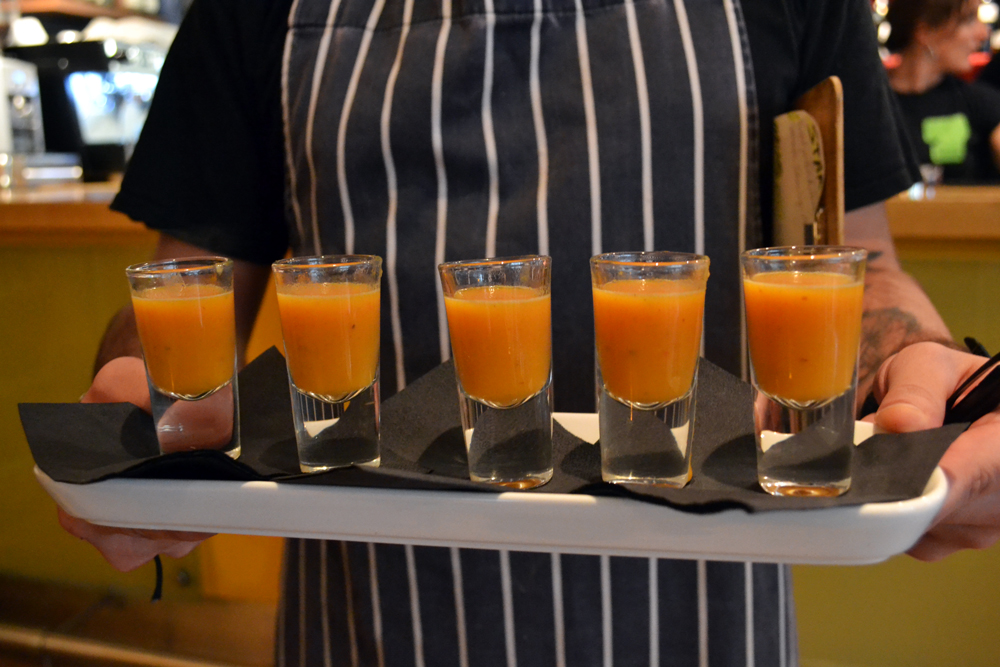 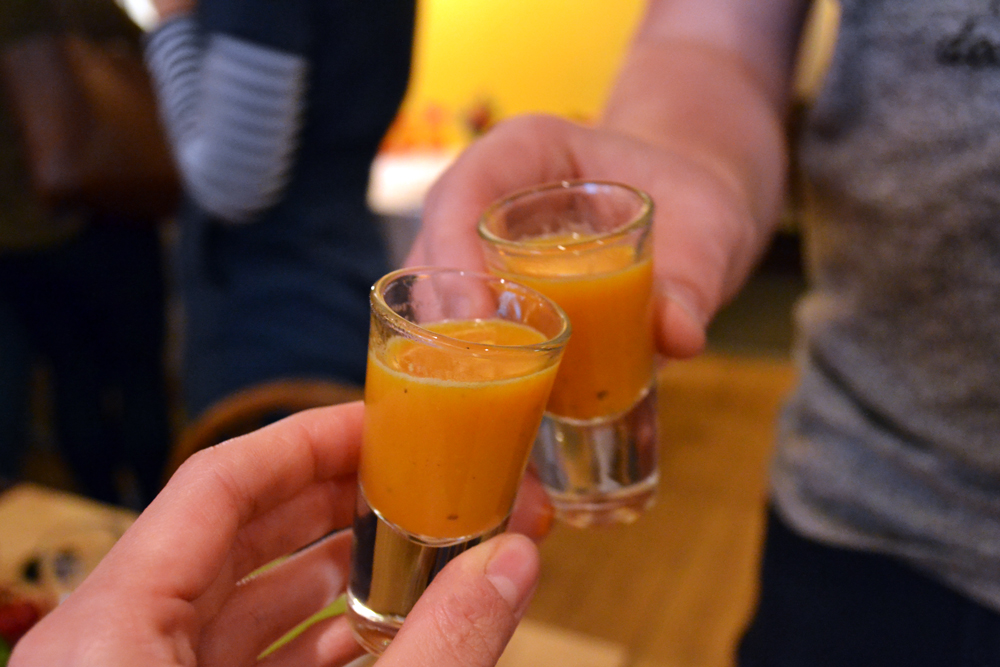 If you’re a fan of frittata’s, this vegetarian bite consists of broad beans, asparagus and ricotta. It has probably been one of the prettiest frittata’s I have ever seen and was incredibly light and refreshing. What took my by surprise was the flash-grilled halloumi that came out cold. I’ve only ever eaten hot halloumi (and I love it) but if I’ve let it go cold, it goes quite dry or hard. Therefore when this came out and I realised it was cold yet extremely moist, I was really impressed. The flash-grill is to thank for mean, meaning the halloumi was added into a hot pan to the point where the outside was char-grilled without cooking much of it, hence the moisture it still held. 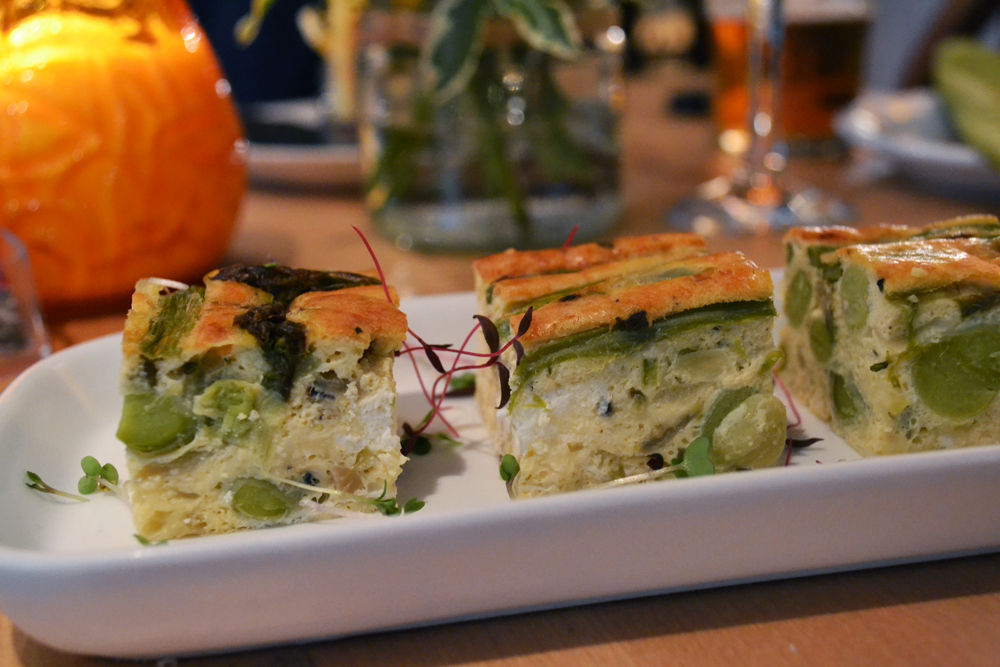 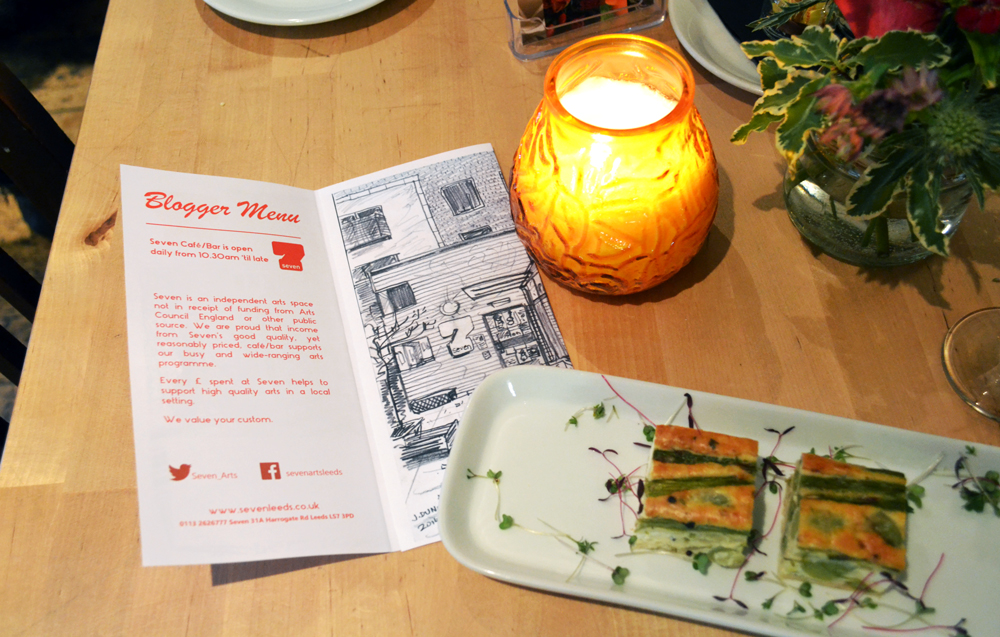 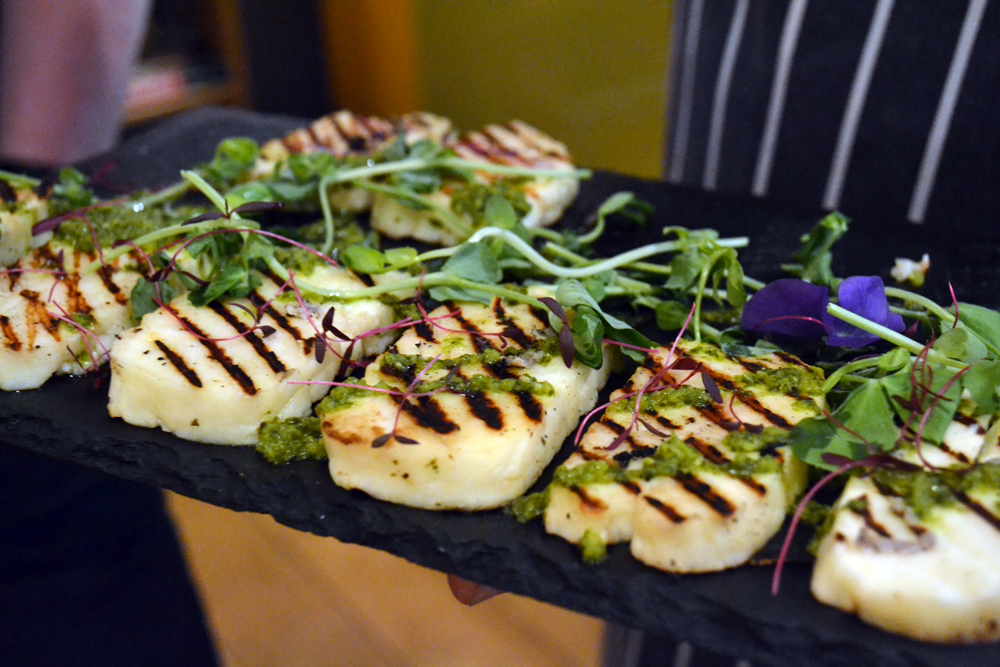 To continue the Mediterranean menu, out came lamb and mint burger served in a baby gem (how cute). Again, scrumptious and happily polished this away alongside the souvlaki skewers which were garnished with fresh tarragon. 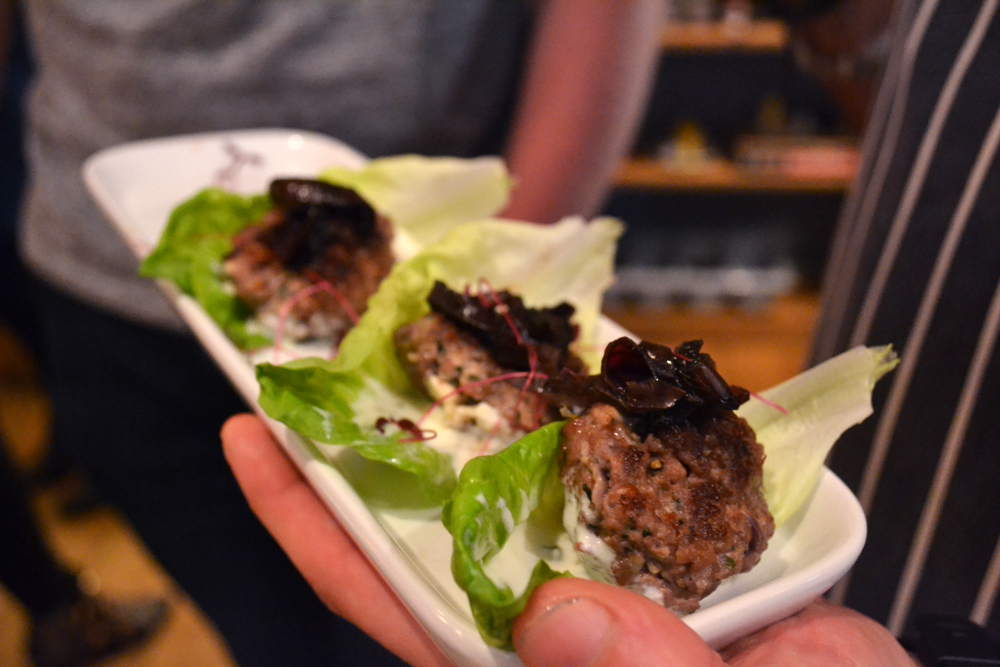 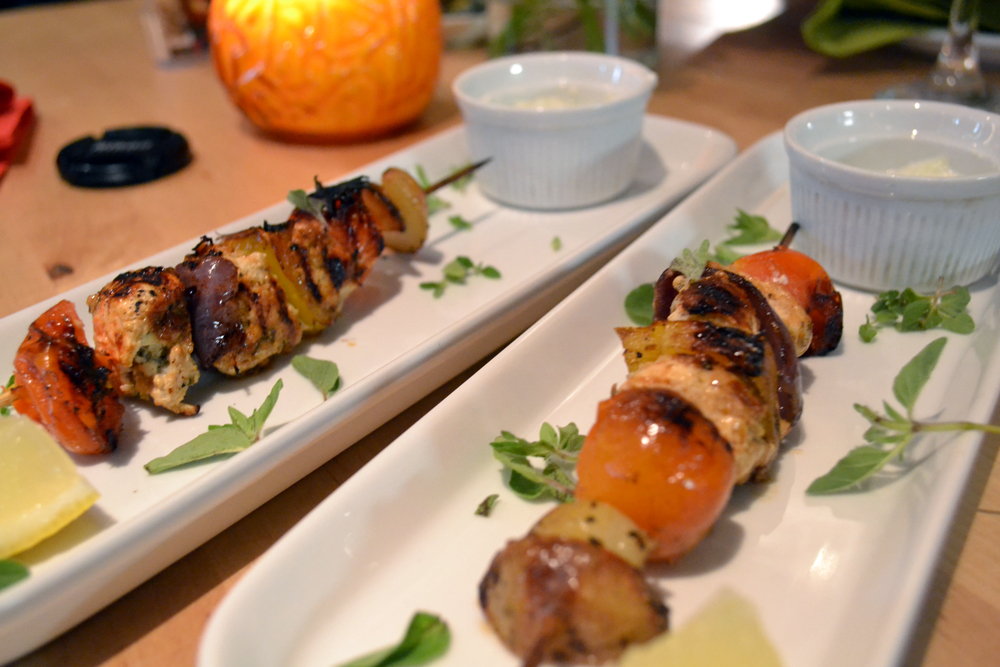 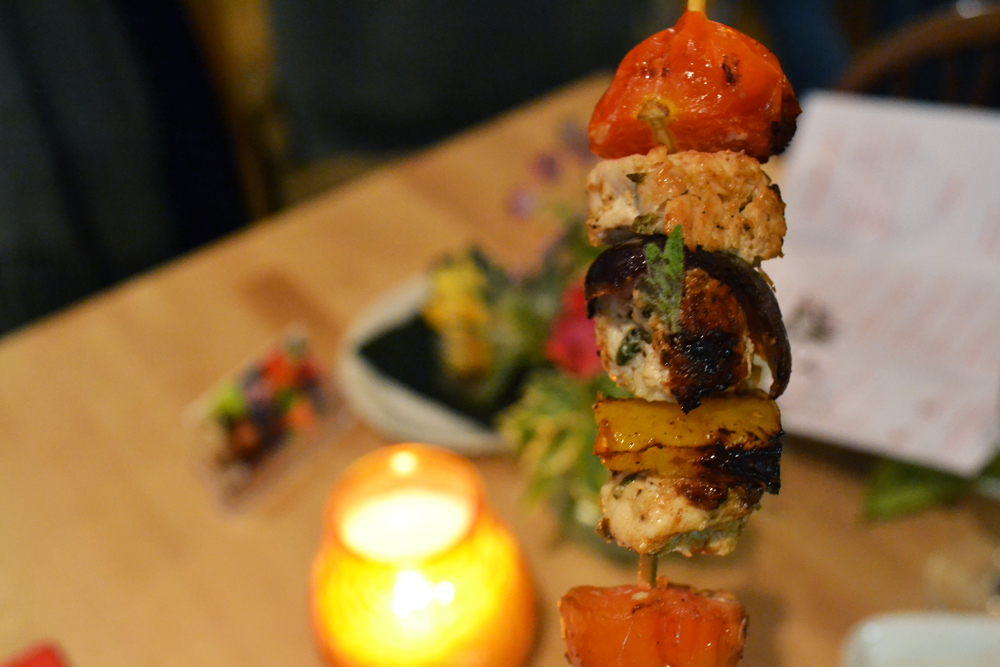 As I say in every post when it comes to desserts, I’m not a biggie on the sweet stuff, but the more I end up attending these events, I feel as though I may become a converted dessert devourer. Three very different treats came out, all of which were quite the delight and completely different. We had the lemon and almond polenta cake, Guinness cake with cream cheese frosting and the white chocolate and peanut butter tiffin. And if your mouth isn’t watering yet, here are the snaps. 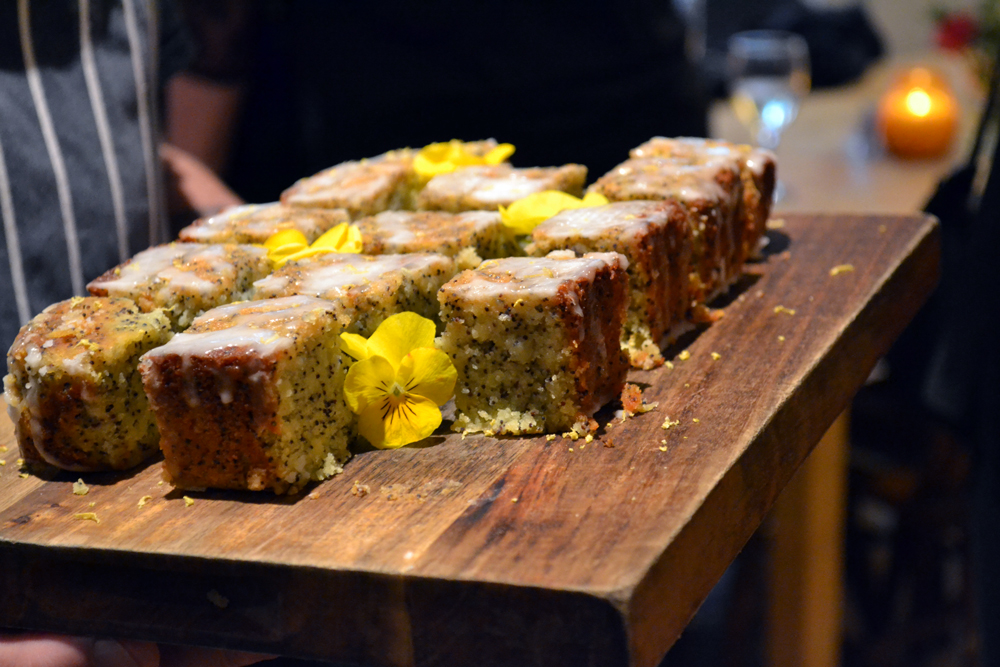 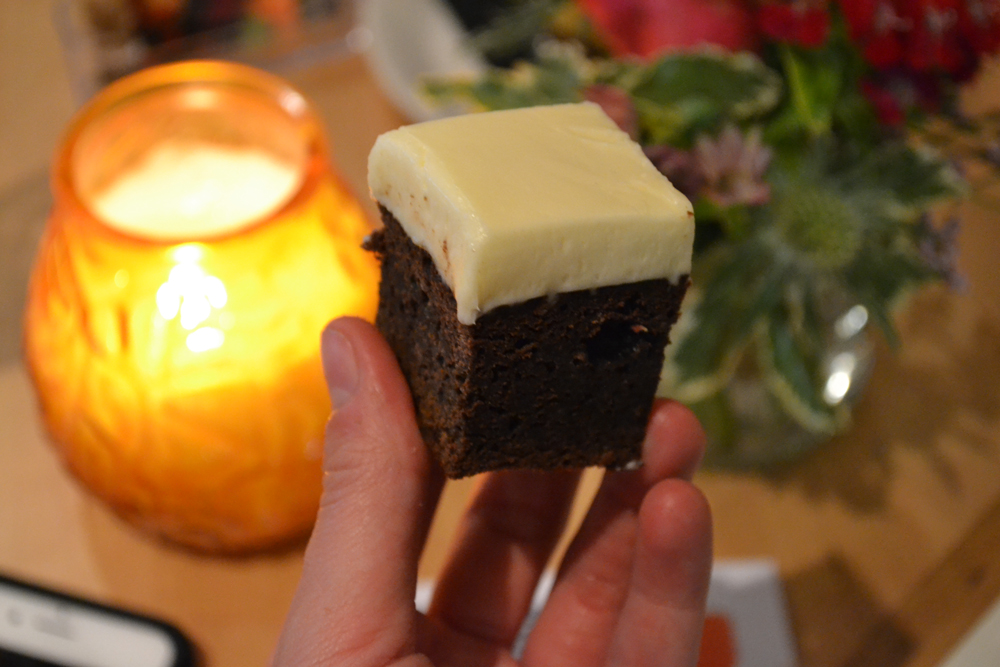 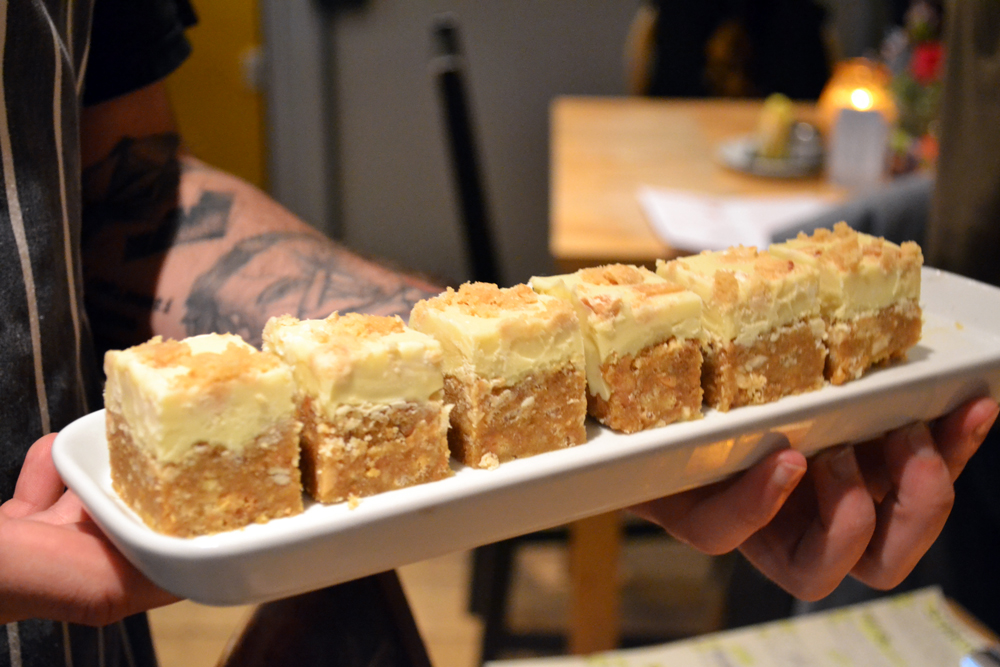 The food has been an absolute breath-taker and I’ll be definitely heading back in the next few months to re-indulge in their menu which will be in full swing next month, in addition to booking myself into a few of their events. As an independent art space, Seven’s income is invested directly back into their art programme, which essentially helps entertain us Leeds locals. 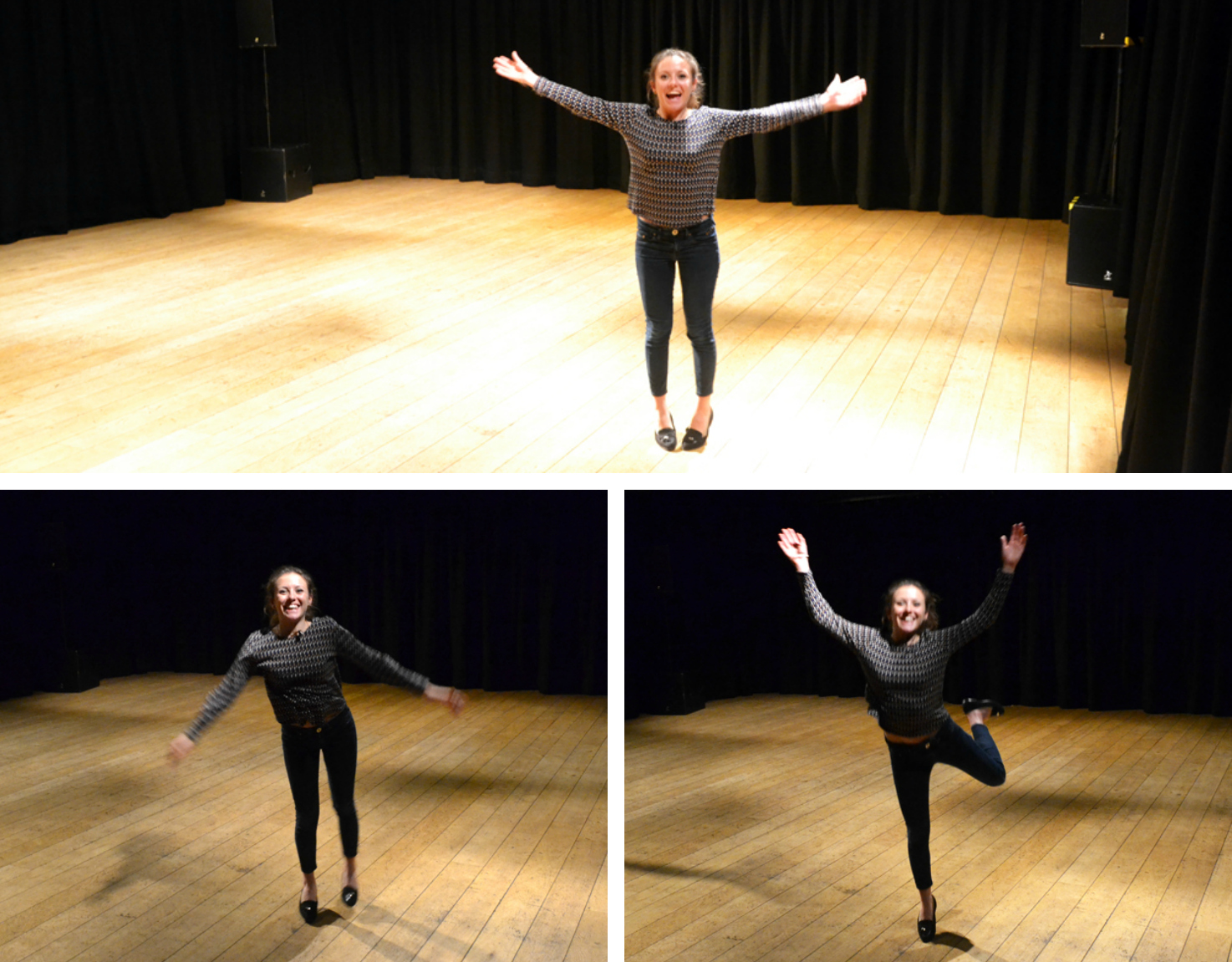 You may remember in one of my posts a few months back, I mentioned that my work supports a charity every year. We’ll do a load of fundraising, SEO services and occasionally hold events for them. This year we’re working with the Lighthouse Union Store (LUS) which is a charity that helps young individuals with Autism acquire the right skill set to find employment. 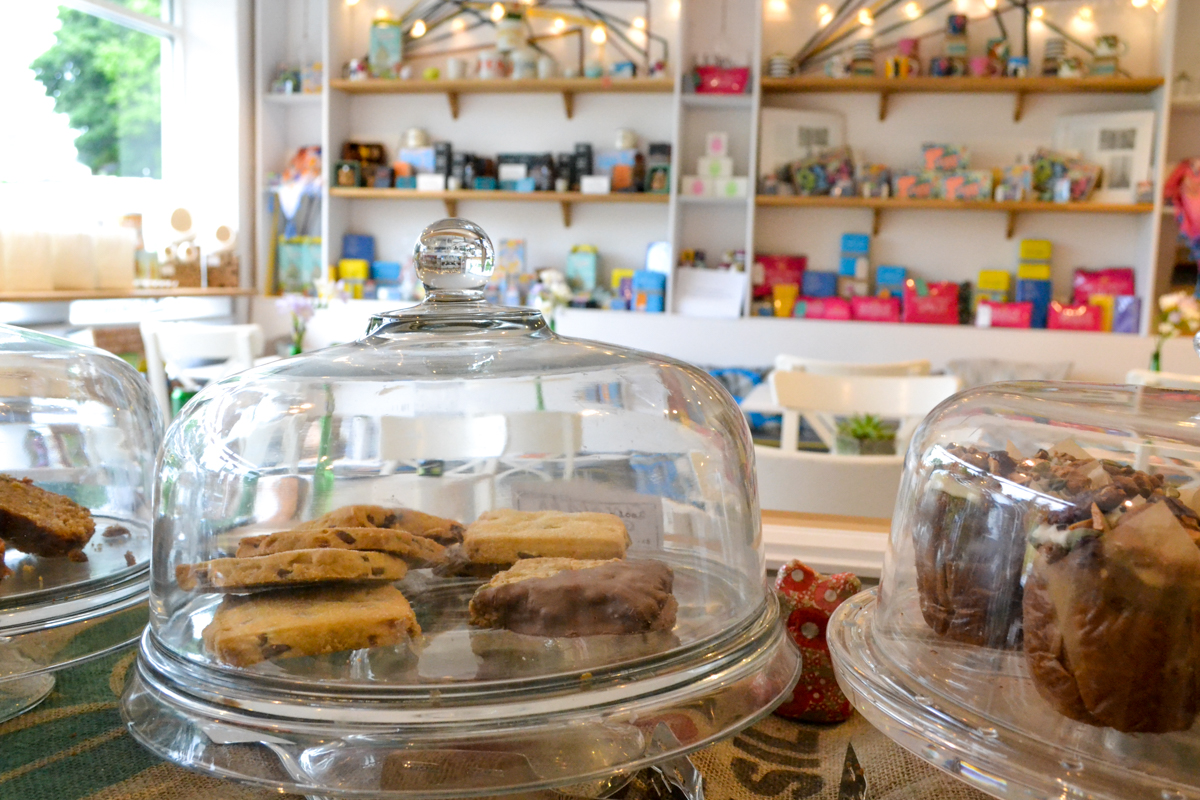 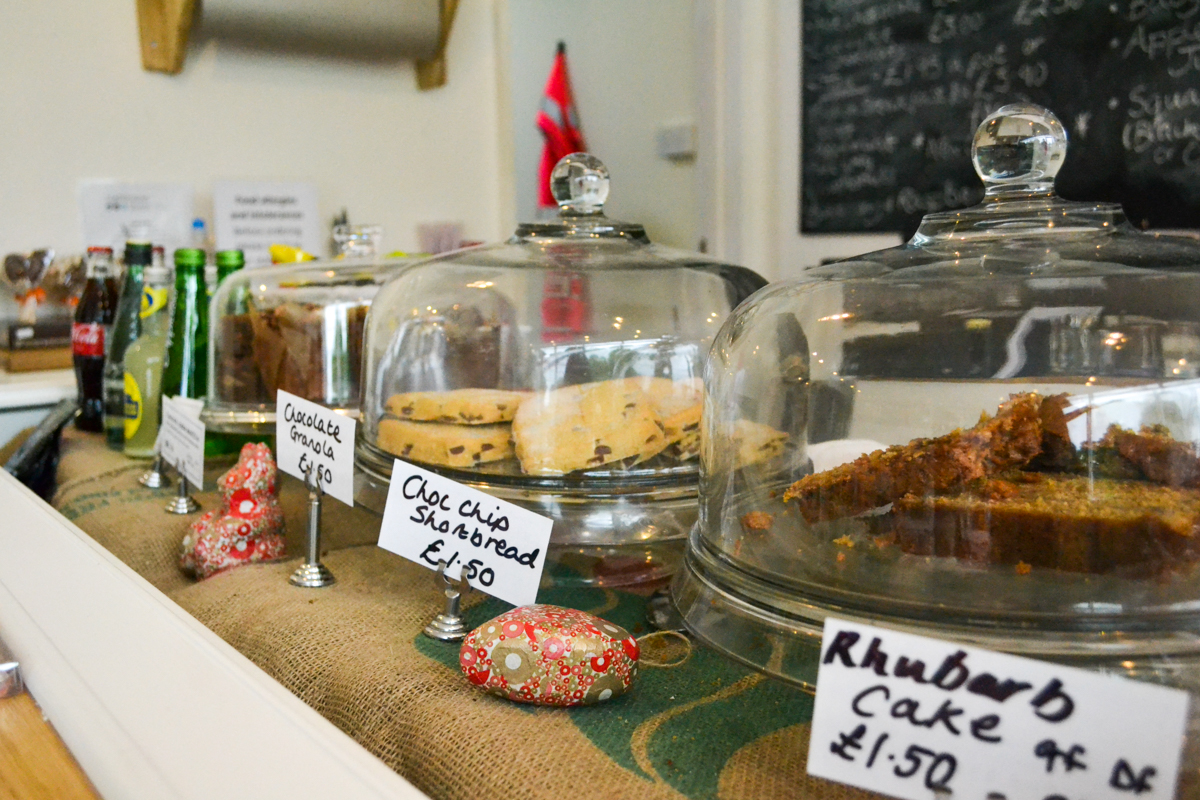 LUS has a super cute store in Cookridge that is broken up into three sections. The downstairs is split with half being a café and gift shop whilst the other half is a charity shop where you’ll spot quite the impressive designer pieces on the rails. The upstairs, which isn’t accessible to the store visitors, is a centre for their students where they’ll continue with learning and complete BTEC’s when they’re not serving on the shop floor. The food served in the store is cooked fresh and sourced locally with the menu changing regularly dependant on what produce is available. What’s great about their cafe as well is that vegetarian and vegan friendly options are available too, AND, if you have a sweet tooth, then you really need to visit. Their chocolate brownies are seriously something else! 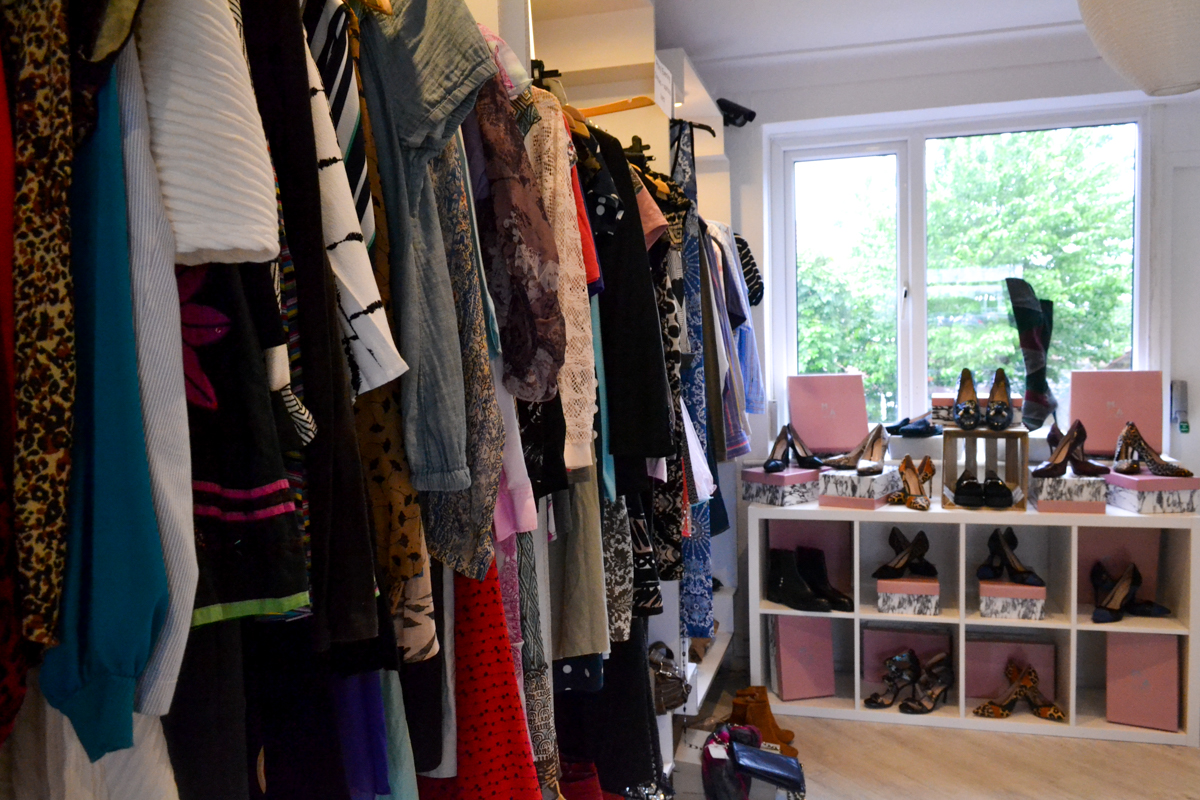 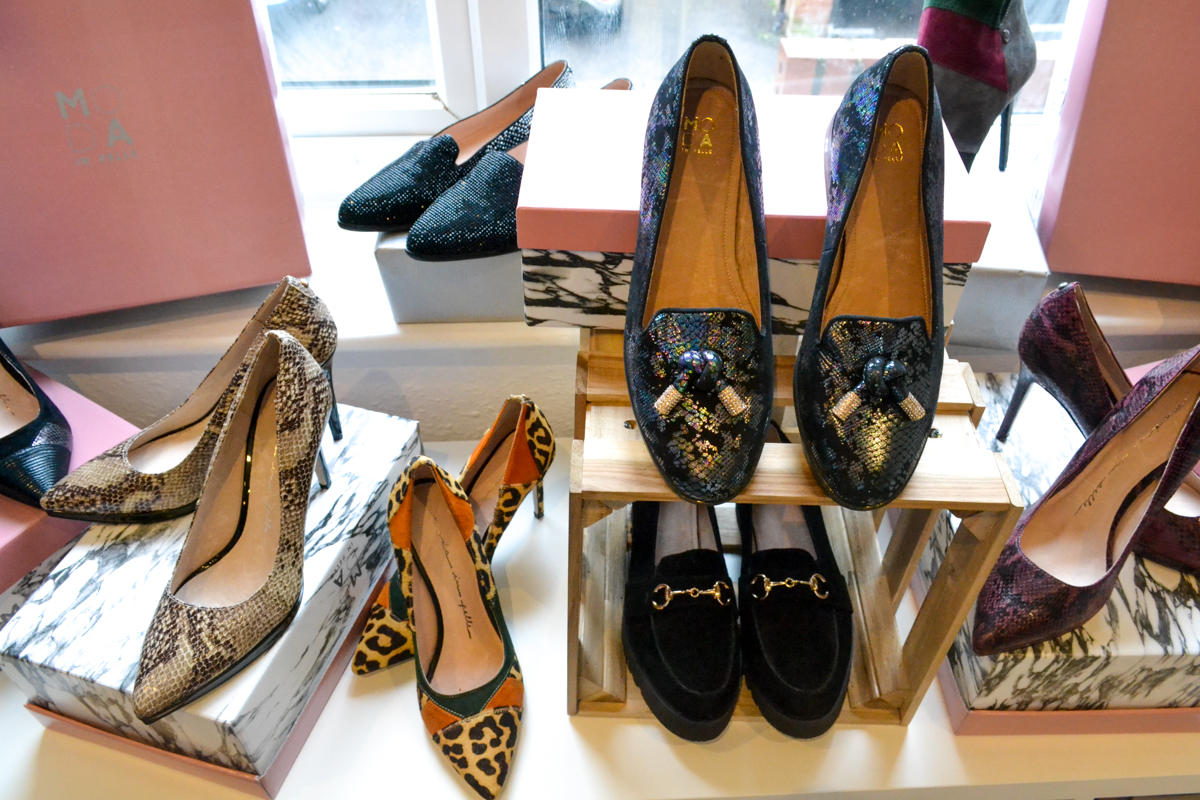 So toward the end of May, we ended up hosting an event for the charity, to not only raise awareness of the charity and store, but to also put people in a situation where we tried to replicate the difficulties people with Autism may face when communicating. We restricted their communication by making them wear a mask which was a image of themselves. We named this the #LighthouseSpeedFriending event. All our lovely bloggers had three minutes to interact with one another wearing the mask. Speaking to them afterwards, everyone said just how difficult it was to understand one another, and how surprised they were about how much you relied on facial expressions and lip reading. 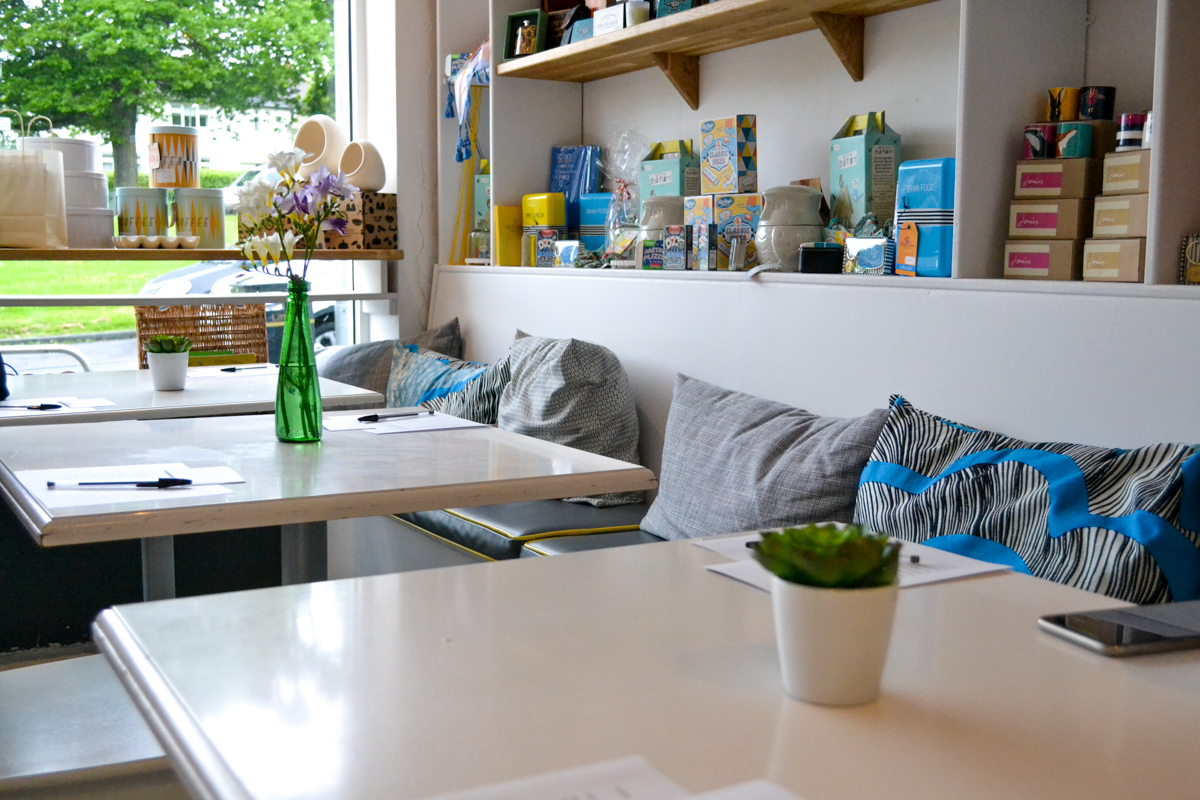 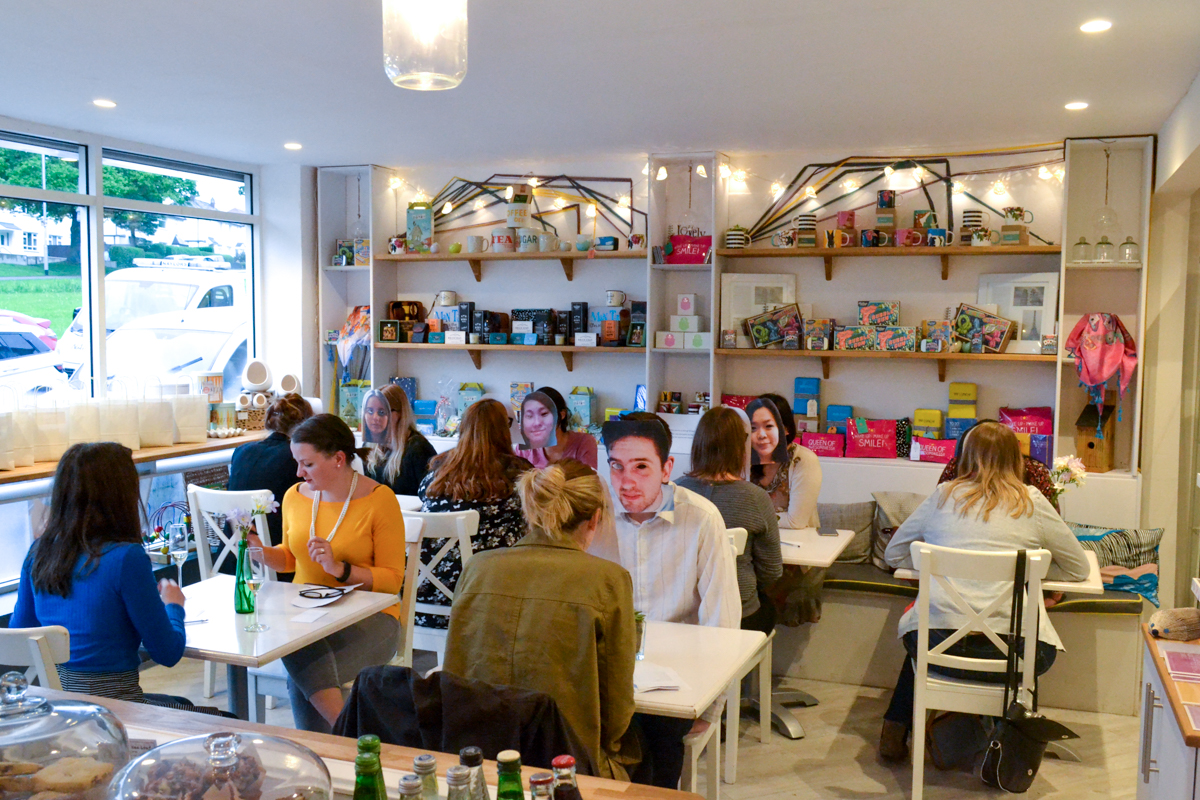 Before the event kicked off, I tried out just how tough it was to talk to someone with a mask on and I can say, it’s very confusing. In the photo below on the left is Chloe and myself, and even posing for that photo was really odd, behind the mask I could feel myself smiling, and obviously that makes zero difference in the photo after. The person taking the photo kept asking if we were ready, which of course we were, but because they couldn’t see us smiling they had no idea. In hindsight, that’s quite funny yet frustrating, and even talking to Chloe, I had no idea if she even understood what I was trying to tell her, because with having the mask on I wasn’t sure how she was even reacting. 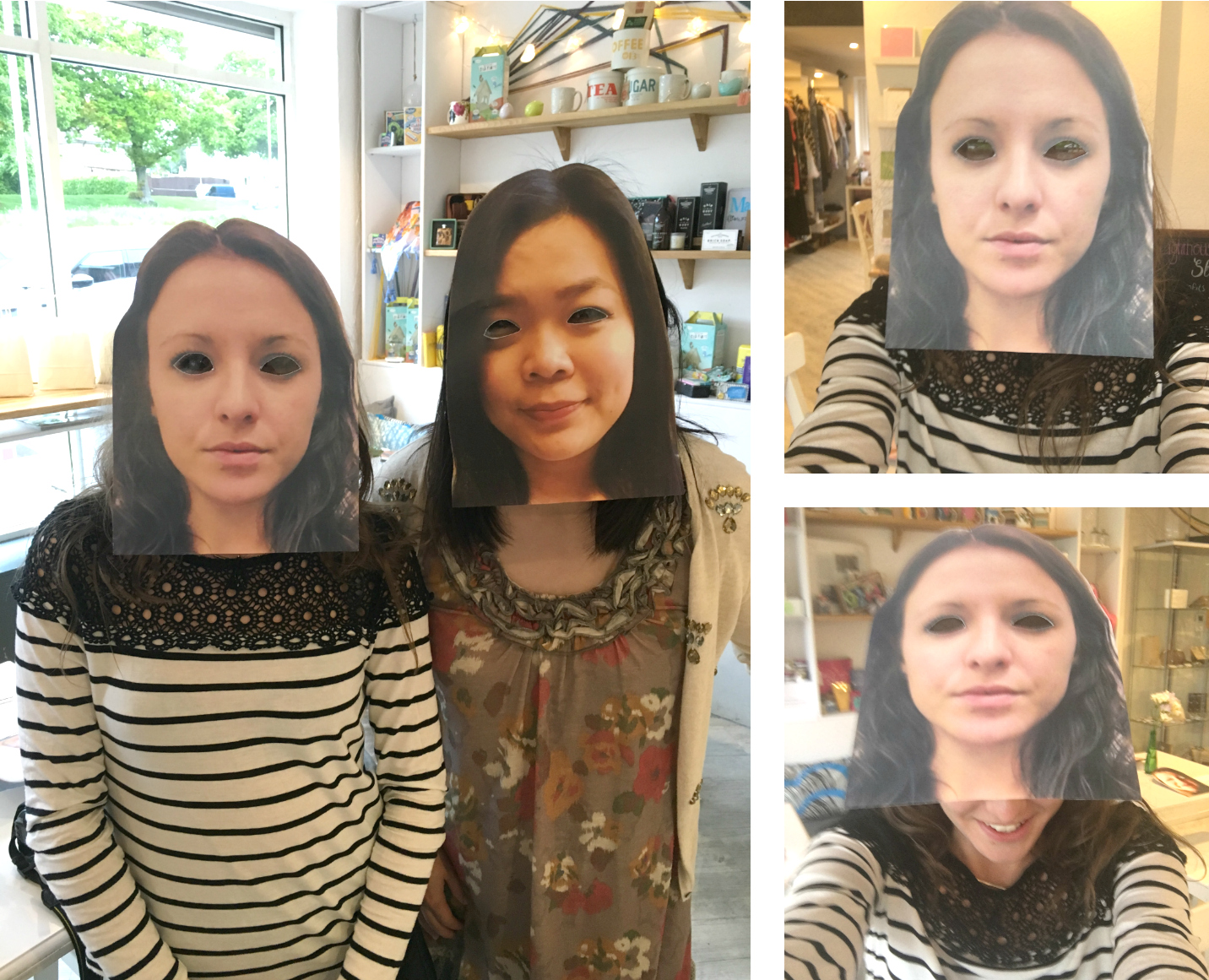 Either way, if you’re looking for a wonderful place to eat that genuinely invests back into the community by helping people or art forms flourish, give these two wonderful places a try and support cafés that support back. Good karma guys!

Let me know if you’ll be looking to visit Seven or the Lighthouse Union Store, as I’d love to hear your thoughts after 🙂 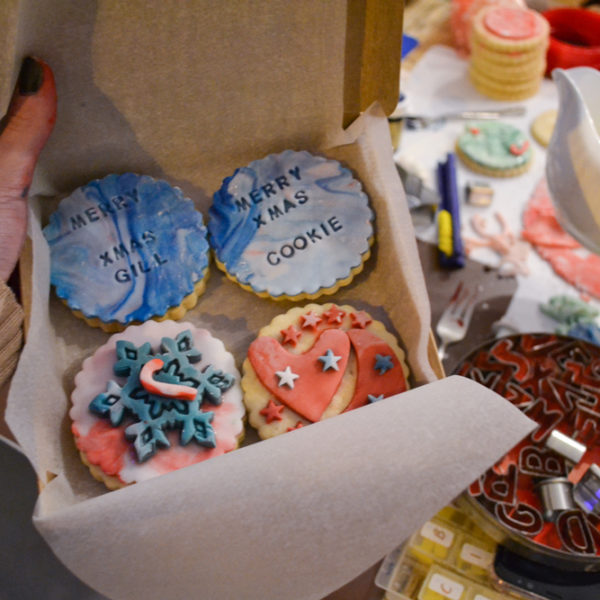 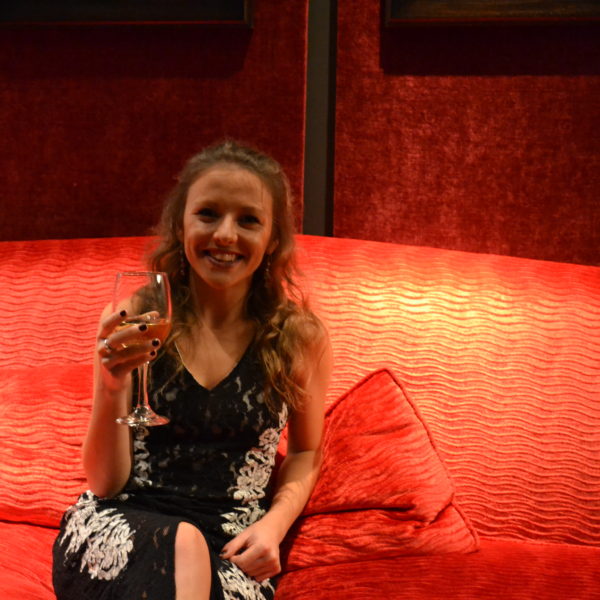 9 things I absolutely love about blogging 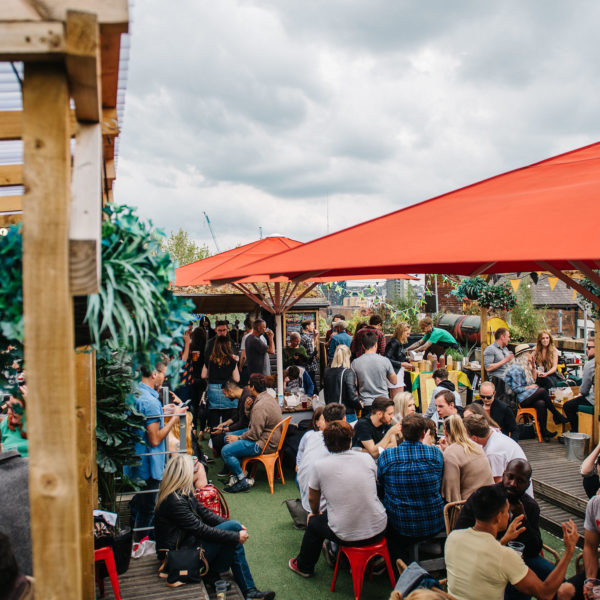 9 Leeds Indie Food Events Not To Be Missed

Blog, Dining Out, Leeds, Things to do
READ ARTICLE
There are no comments yet. Be the first to comment.